Breaking with convention somewhat I have bound my quilt before I've finished quilting it and it's turned out to be a brilliant idea!  The raw edges of the quilt were really stressing me when I working on it and I think I needed to feel like some more progress had been made to spur me on.  It's meant my quilt feels a lot more secure to work on  and I've fallen back in love with it. 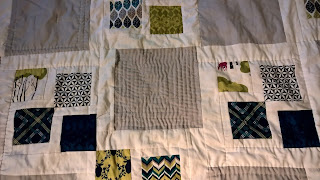 The weather has been terrible these last few weeks in what is supposed to be summer.  Having taken the boys to France with my Mum for a week at the end of June/beginning of July in a 40 degree heatwave I wasn't expecting to work on this quilt again until the season changed.  This is the largest quilt I have ever attempted and when working on it you feel like you're sitting in bed as it fits on a double bed!  So in a way this cooler spell has been a blessing although wearing socks and slippers in late July is just rude.

As you can see there's a lot of work to do, spiraling every light grey square and quilting in the ditch between everything else but there's a sense of achievement already in that it is now a functional item. If it snowed tomorrow, unlikely I know, I could gather everybody under this and watch Disney's Hercules for the 5th time this week. 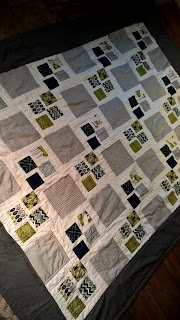 Also we're redecorating the living room and so when we're all snuggled under this we'll be perfectly co-ordinated, almost camouflaged!