For once I'm in the position of having to catch up on the blogging not the sewing - a rare occurrence. The unpredictable British summer continued and the heat started up again.  August came and a family holiday to celebrate Dad's 60th year on the planet.  Unfortunately truck issues meant Olly couldn't come at the last minute so Debbie (Rahrah to the boys) came in his place.  So it's fitting that when back from vacances I picked up on a project abandoned many moons ago.  This quilt for Debbie was started maybe 3 years ago or more, the blocks were all separate still and there was little cohesion.  However, Debbie is a girl with crazy tastes so after our holiday I was inspired to continue.  I've joined up these 8 blocks and popped a border on.  The plan (in time for a Christmas present) is to add another 2 borders, one made up of squares of the original fabrics, then a plain one and then to go to town on crazy decorations, I'm thinking kitsch patches, sequins etc 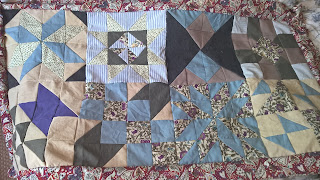 My next project has a long history.  When my Granny and Grandpa moved into a nursing home their house was emptied.  My Mum and Dad saved me some bags of what appeared to be table linen.  On closer inspection these belonged to my Granny's father Charles Micklem.  Charles Micklem joined the Howitzer Brigade of the Royal Artillery and saw action at Gallipoli and in France.  He must have been quite a remarkable man as he found time to take a law degree while serving in the trenches.  What I had was a bag of his linen from World War I all monogrammed in some way.  I decided to make something for my Granny Dora out of these.  I'd seen a similar pattern to what I ended up making but couldn't find it so made it up as I went along and this is how it turned out: 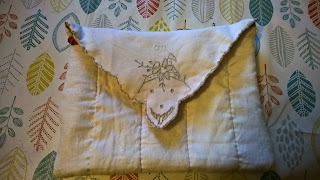 The idea was for it to be a little envelope bag, so I sewed strips of slightly different patterned linens together, used a strange embroidered face/table cloth corner to be the flap.  I then lined it with a pretty floral fabric. 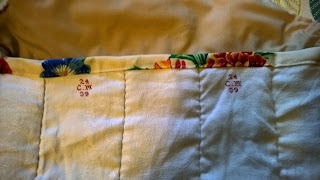 My final project of late has been one that I won't finish until I'm 101.  A charm quilt that has been on the go since I first heard the idea of no one piece of fabric being the same - what fun!  My Mother in Law explained EPP (English paper piecing) to me after I had already started using the most laborious method ever so I then thought that it had been pointless and chalked it up to experience...however, I revisited it and found that I can join EPP bits to it, so the charm quilt lives and will go on growing....gradually! 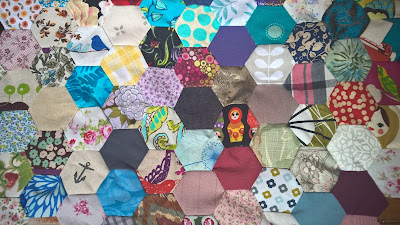 Should anybody ever ask, I know the history of all these little bits of fabric from my Nana's nightdress to a skirt I bought in River Island aged 15!
Posted by Zoe Davies at 06:10