Well, it's taken me ages to cut out most of my blocks.  Caspar has been cutting his 2nd tooth and refusing to sleep at the same time as his brother at lunchtime so I've still not finished cutting out the white strips that frame them....BUT I couldn't resist any longer and had to join a few blocks up to motivate me onwards.

I've decided to machine piece this quilt as I want to see results quicker which has some irony as my sewing machine (we'll call her The Beast), is two floors up so escaping up there without waking sleeping babes is often time consuming in itself.

The Beast used to belong to a lady who lived on the Isle of Wight in my Father-in-Law's Parish (he is a Church of England Vicar), and when she died her husband gave her sewing box and machine to my Mother-in-Law. Along with the Beast came a box filled with bobbins, a few different feet and threads.  I don't know the lady's name or anything about her but the smell that comes when you open the box is very much a person's smell (not in a bad way), and consequently I feel strangely linked to her whenever I use it.  The Beast is my first sewing machine - she is a Singer and I love her.  Except when I'm having bobbin dramas but more of that another day. 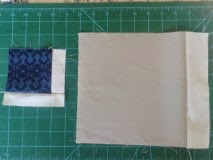 With much fanfare here are my first two blocks, of course as soon as I'd chain pieced a few more a wished I'd finished cutting them out first BUT I find being purely logical a struggle and it is nice to be reminded again of why you're doing something.  So onwards and upwards, I hope to report back within a week or so with more blocks pieced!